I Directed a Comedy Sketch Three Weeks Ago... 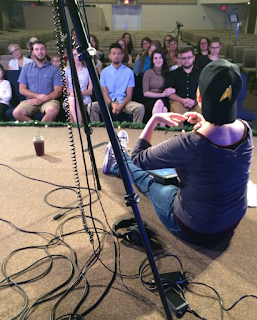 ...and waxed not-so-poetic about it here.

I feel really grateful and lucky I got to do it. In the past, I've done sketches with two or three people. My specific goal this time was to work with a larger cast. Now that I know I'm very comfortable with that, my next goal when it comes to directing is to do something truly cinematic.

I've been dabbling in sketches since 2013 as a way to dip my toe in the water. I have the tendency to put myself through more proving grounds than I really need to as a stalling device. (Thanks, low self-esteem and imposter syndrome!)

But I do think it's also a good idea to just shoot something while you're waiting for or working on an idea you truly love. If you keep your hand in, you'll be in good shape when the idea is finally worthy of your effort.

Today, I'm working on a script titled "Author". I hope to film in a few months and create something that will truly feel like a film. I want to work with a full crew (especially a cinematographer) and film in multiple locations over the course of several days vs. what I've been doing the past few years, which is setting up simple and quick shoots for one day.


This is corny to bring up, but Tony Robbins has a famous quote about dabbling. Paraphrasing here, but the basic idea is that our culture rewards dabbling and we should consider re-wiring our brains toward mastery. That resonates with me.

In the past, I confess I've set the bar really low for myself. We do live in the age where taking a picture of yourself doing something can sometimes give you the same rush of endorphins that actually doing something should give you.

So I think it's been a weird mix of nerves and just not feeling ready. But the irony is, you can't really be ready until you've experienced exactly what you want to do. And all I want to do for the rest of my life is tell stories.

A few years ago I was really burnt out. I was directing a lot of nonfiction local tv, more journalism-type stuff and I learned so much, but it also just completely fried me. After that, I just wanted to go out into the world and do work that could be done on the day instead of constantly lugging home hours of footage and cutting and cutting and cutting.

So I did some performing work, which is great because it gave me a better understanding of how it feels to be an actor. So I know better how to ask for what I need as a director now. Empathy is always growth in a collaborative environment. I'll never respect directors who get a kick out of intentionally making their actors suffer. It's not necessary.

I also did some light directing when I was working in digital puppeteering in San Francisco in January 2016. It was the first time I'd stood in front of a group of actors (who weren't my friends) and talked to them about character in a long time. It was so much fun that I knew I was ready to go back to doing my thing.

Now I have three new comic ideas, three feature scripts I've written, one short script (Author) I'm really passionate about and I feel like all the threads are finally knitting together. I also know I'm ready because I feel an intense jealousy when I see some of my acquaintances in the area out filming. Jealousy is a great and helpful indicator if you understand how to read it. 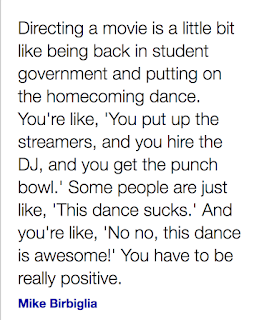 Making movies is hard. It takes a lot of collaboration and it has to start with a stellar script. Storytelling in general takes a lot of energy and a lot of stamina, especially if you're collaborating with other people.

You have to shepherd your story through a gauntlet of people who sometimes have your back and sometimes want to engage you in power struggles because of weird psychological issues they haven't quite worked through yet.

Though I do think I've gotten better about choosing collaborators over the last two years. But I had to learn the hard way. If you have positive people who want the project to succeed, you can trust their feedback.

In fact, I pressure the people I've been working with to give me feedback on this most recent project. Like, peer pressure, pressure. Because I can't quite get the edit to click. (Because I didn't film enough on the actual day we shot.)

At any rate, I'm really rambling now. I write a lot here about writing, but I don't often talk about directing. I'm the type of person who writes to understand things vs. the types who know exactly what they want to say before they start. So just like you can read jealousy, you can gauge your own readiness by how you talk and write about directing. So I'll let this sit for a few days and come back with a bag of popcorn and see how ready I really am.
Email ThisBlogThis!Share to TwitterShare to FacebookShare to Pinterest
Labels: director