Ruthie, A modern Jewish widow takes a road trip across America to get her Christian mother-in-law, Etta, to her new retirement home. While the rest of the country finds Etta a delight, Ruthie must confront what's really been irritating her so profoundly.

I usually create a Spotify playlist for the projects I'm working on, but in this case, the story came quickly and I didn't need to listen to music to get un-stuck at any point. (Which probably means I need to do another re-draft.)

My goal for this screenplay was to write a family-friendly film that was unabashedly positive and populist, something that could've come from the nineties. Bonnie Hunt was a hero of mine growing up and I was aiming for "Ruthie" to be a spiritual cousin to her fantastic "Return to Me" or Norman Jewison's "Only You". (Which, not-so-coincidentally, stars Bonnie Hunt.) I also wanted the script to be filled with opportunities for the actors to improvise, especially if the lead characters were cast as I envisioned them, SNL veterans.

*I cheated a little and used names in this logline. I never use them in official submissions.

P.S. Want to hear a crazy story? In October 2014, my sister and I rode the train to Chicago specifically to tour some movie sites. The first place we went was a filming location from "Return to Me". (A movie I took myself to see four times when it first came out.) While there, I tweeted about it. 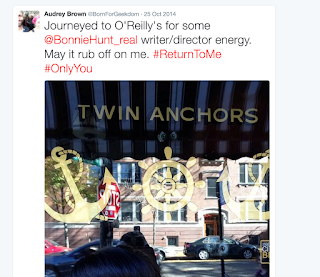 And WHILE I WAS SITTING ON THE CURB OUTSIDE THE BAR, I got the news that my best friend and I had just been accepted to the LA Comedy Festival for a short comedy sketch we filmed. And then THIS HAPPENED:

Isn't life beautiful? And amazing? I'll answer for you. Yes and yes. Ever since then, I've truly tried to follow her advice. I've continued to write from my heart. And I just can't wait to see what's coming next!