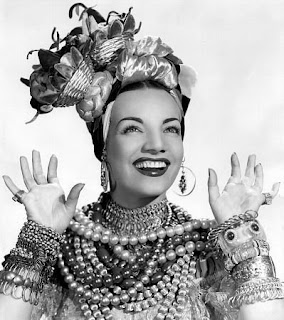 This is the story of a film I didn't make. It's also the companion blog for this script.

I'll tell you the story, then I'll tell you how to avoid the mistakes I made. (All while peer-pressuring you to appreciate Carmen Miranda.)

Two years ago, I was fully invested in a story I wrote about a little girl obsessed with Carmen Miranda. I cast the two child leads, did the script breakdowns and sought the rights to use Carmen Miranda's music and imagery. That's where the story begins to end.

I didn't have the budget for said rights. (Miranda rights!) I also didn't have the heart to tell the story with a knock-off version of Carmen. As a true fan, I honestly felt that would be sacrilege.

Miranda's image is frequently turned into a cartoon, something that upsets me immensely. (That's why I was so happy the Coen Brothers came the closest I've ever seen to an accurate portrayal of her in "Hail, Caesar"...even if that character wasn't technically her.)

I even had a performer in mind for the iconic role. Because I couldn't get the rights, I never reached out to her. But I would've cast this lovely and talented force of nature. Projects have their time and place. There's magic to doing something when you first conceive it. Let too much time pass and some of the magic fades for reasons I haven't yet learned...

I was also approaching the intersection where my ideas as a writer were starting to exceed what was possible for me as an independent filmmaker. Looking back on the script, it's kind of...okay...it's very schmaltzy. A bit repetitive in nature, hammering some points home too hard and leaving others vague and mysterious.

Without proper care and feeding, the short film died.

What had happened was...

1. The first draft was a twenty minute short. This was not financially feasible for me to attain the quality I wanted unless I sought outside financing. Looking back, this was a completely practical route I could've explored. Why didn't I do that?!

2. Then I cut the script down to a preview I could personally finance. I thought I could use it to crowd-fund the twenty minute short in order to snag those Miranda rights. (I will never not take the opportunity to use that pun.)

I did nothing with this version for some mysterious reason lost to the sands of time. (See: being insecure and non-committal.)

Crowd-funding makes me nervous. But so do large-scale aquariums and ferris wheels. That doesn't stop me from participating in fun times on or near both of those things.

But seriously...what if the glass breaks and sharks just come chomping out indiscriminately in a waterfall of doom?

3. Next I decided to make it a true short, clocking in at five minutes. This hacked out so many plot points script-wise, the story felt rushed and incomplete.

That's where it stands today. I'm still sad it didn't work. Even as I do this post-mortem, I'm consistently confronted by the fact that I was, and still am, making excuses.

What people will read on the page is always less than half of what the idea is in your mind and I'm still that little kid that wants to tell everyone, "I can do better, mister, I swear!"

1. I now believe you should let go of the projects that don't work to make room for the ones that will.

After this, I started making short comedy sketches with my best friends and writing partner. We've done four and each sketch has made it onto the festival circuit. In order to complete these, we had to create a production company that will allow us to do bigger projects in the future. In fact, we're already out of that phase and onto what's next. Hard to believe...
2. The difference between successful writers, actors and directors is when they encounter failure, they use it as a learning experience and move forward. I know you've heard that a million times, but it's still true.

If you're going rounds with a project that won't take off, think of it like one of Goofy's short films. "So You Failed!" Reflect, learn from it and move forward.

In my case, the antics were trying so hard to stay ahead of everything that I ended up cutting myself off at every pass. I never took any chances with Little Carmen, I never asked for help and I never reached out for resources. I just tried to strategize how to make it all happen by myself, nigh impossible in the team sport of filmmaking.

Writers are especially good at overcomplicating and overanalyzing things because their special mutant power is imagining all the potential outcomes of any scenario. It allows us to seek the best story options while re-drafting.

But also sometimes this happens... 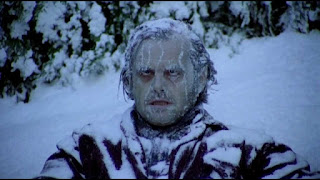 So don't over-think things and don't go insane and probably don't take that posh-sounding caretaker job at that isolated hotel without Googling it first. Okay? Okay.
Email ThisBlogThis!Share to TwitterShare to FacebookShare to Pinterest
Labels: advice, all writers are obsessed with themes one of mine just happens to be Carmen Miranda that's not weird YOU ARE, Carmen Miranda, filmmaking, screenplay, scriptwriting, writing about writing