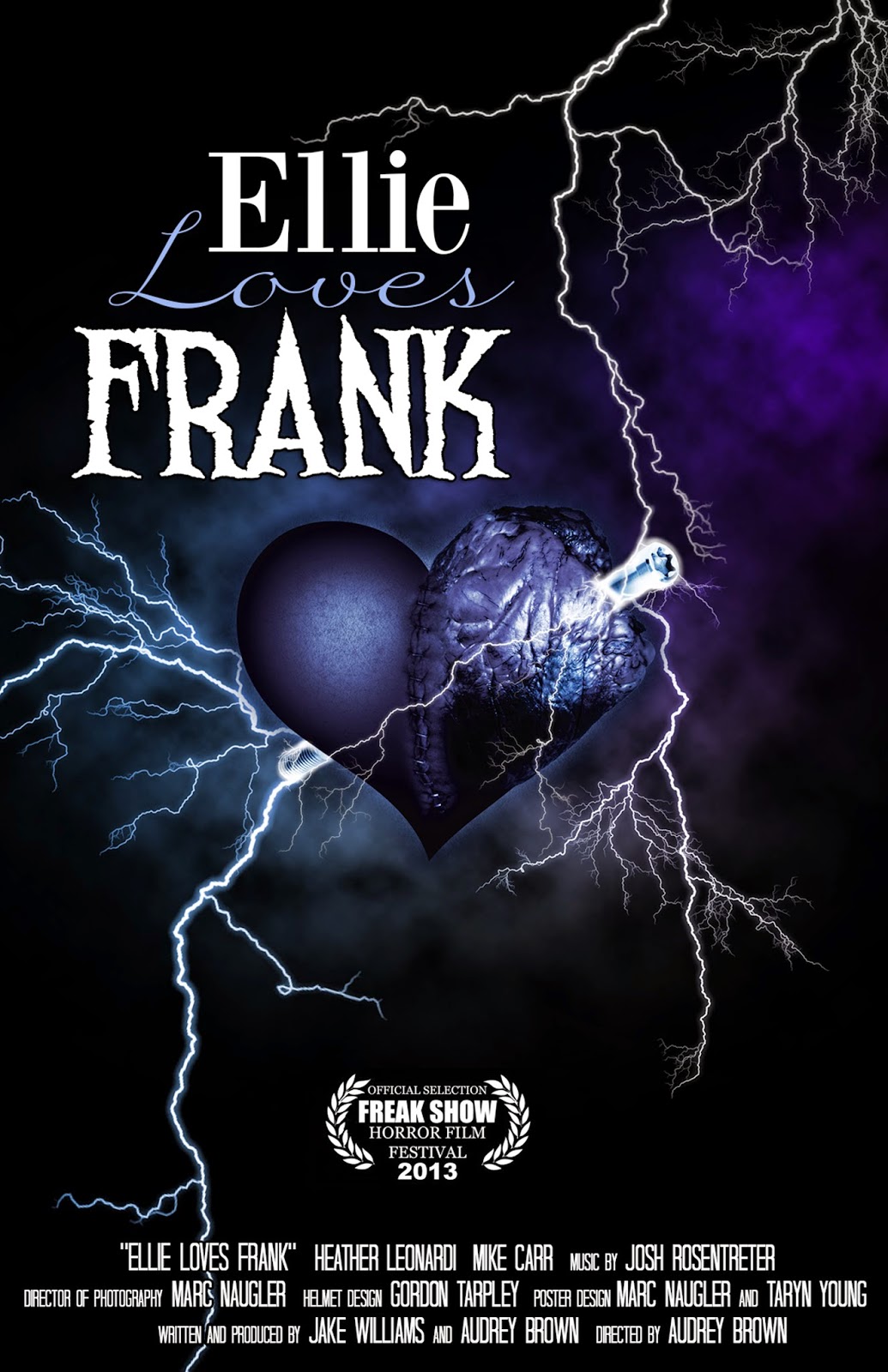 Jake and I wrote a sequel to our 2013 horror comedy short "Ellie Loves Frank". It was titled "Frank Hates Parties", we just never did anything with it.

If we ever shoot with this idea again, I look forward to working with some new monsters and some established hair and makeup artists.


In the meantime, here's the script. As usual, I've messed with the format a bit to make it blog-friendly.

EXT. HOUSE – NIGHT
A white Ford Focus drives down the road. The headlights turn off as the car pulls into the driveway of a house.

EXT. CAR - NIGHT
ELLIE in a white dress with white streaks in her hair is in the driver’s seat.

EXT. HOUSE – NIGHT
The lights are on in the house and a SHADOW passes by one of the well-lit windows.

INT. CAR – NIGHT
Ellie makes a glarey murder face. A groaning sound comes from inside the car. Ellie looks toward the passenger seat.

EXT. CAR – NIGHT
From the front of the car, Ellie turns the dome light on and checks her makeup in the rearview mirror. FRANK, in a black suit and white shirt, rises with his car seat similarly to the way that Frankenstein’s monster rises from the table, groaning dramatically along the way. As soon as the seat is upright, the groan turns into a normal yawn.

ELLIE
Hey you know who else can’t stay awake in cars? Babies.

FRANK
Well good morning to you too.

Muffled party music from inside the house begins to play. They both look toward the house. Ellie smiles.

ELLIE
I know. So kitsch.

FRANK
Can you just say tacky?

ELLIE
That is so offensive, don’t start this again.

FRANK
Oh, I’m sorry. Do you like having Jewish jokes leveled at you all night? Cause I don’t.

ELLI
It’s my last name that’s Stein not yours. Everybody has to put with up like, one or two racist friends…

FRANK
It’s not just that. Every year at this party the mummy and the wolfman chase me around with those jumper cables. It’s not funny.


Slowly from the backseat a PERSON in a ghostly white sheet begins to rise, holding a knife.

ELLIE
It’s kinda funny. Don’t you think the mummy gets tired of all those toilet paper comments?

FRANK
Yeah, you’re right and Melty-Face George. He’s so gross no one even talks about him. It’s like he doesn’t even exist.

ELLIE
If it makes you feel any better,
(Points at the house)

DRACULA stands on the front porch with his TWO BRIDES. They are gorgeous and buxom. He is motioning for Ellie and Frank to come inside.

Ellie and Frank are still looking toward Drac and his brides.

ELLIE
They kind of have an unfair advantage. “Rigor mortis” keeps you young. You know what I mean.

The ghost has his knife raised right behind them now.

Ellie and Frank fly into a lecturing rage.

CLAUDE
Uh uh, not tonight, Don and Debbie Downer. Halloween is the one time a year being a ghost isn't the worst.

FRANK
You're not a ghost tonight? What are you supposed to be?

ELLIE
The Invisible man doesn't wear a sheet...he has a hat and gloves and...

Suddenly, Dracula is knocking at the passenger side window. Frank, Ellie, and Claude all jump in fear.

DRACULA
Hey hey hey, none of that. It’s a party, it’s supposed to be fun.

Dracula walks back to the house.

ELLIE
Let’s just go in there and try to have a good time.

EXT. CAR – NIGHT
From the front of the car, Ellie and Frank get out of the car, shut their doors and walk to the house. Claude issues muffled yells from the back seat. Ellie runs back, opens the passenger side door, Claude floats out of the car.

CLAUDE
Rude. I can get out, but my costume can't?

DRACULA (OS)
Hey, it’s Frank and Stein. I didn’t think Jewish couples could come out to a party on Friday night.

The other monsters hoot and literally howl. Frank and Ellie rush back to the car.

ELLIE
Let’s go to the Thompsons' party instead.

CLAUSE (OS)
(Whiney)
How am I gonna get home?

MELTY FACE GEORGE sits on a couch by himself. He is truly grotesque with what appears to be wet, perpetually melting skin coming off of his face. He wears a long sleeve t-shirt and gloves and has regular hair. He’s bobbing his head to the music, trying to be cool. He signals to people off screen, trying to get them to come sit with him.

Frank and Ellie stand in the middle of a group of squarey square WASP people. Everyone is eating dip from small plates.

WASP 1
Your costumes are AMAZING.

Ellie and Frank smile and look flattered.
Email ThisBlogThis!Share to TwitterShare to FacebookShare to Pinterest
Labels: bride of frankenstein, ellie loves frank, films that never got made, frankenstein, horror comedy, melty face george is one of the most unsung monsters of all time, scripts and screenplays, writing